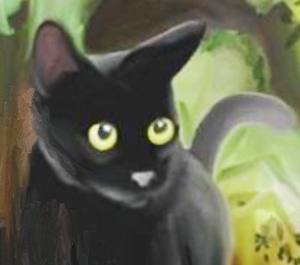 cleo85 is a 73 year old German. She moved to San Antonio, Texas after the death of her husband, a US Navy veteran of 20 years service. The couple was living by choice with a dog and four cats at the Yucatan Peninsula [Mexican Caribbean] for 18 years - more...

She is a top ranked traditional artist and is currently holding the #49 position.

Pirates of the China Sea 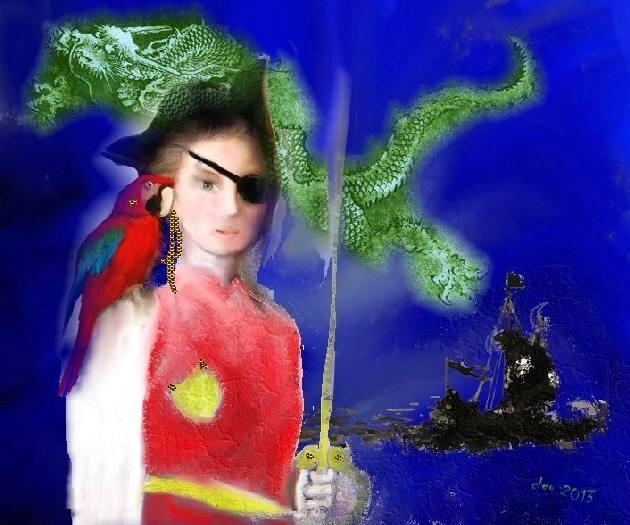 This is a rather romantic take on piracy. A pirate fairytale perhaps, but it is based on reality. The history is full of many tales; but none of them are more intriguing than those about female pirates. There were quite a few female pirates in the history of the world, but the most successful was doubtless Ching Shih. She was never defended. During her active years in the early 19th century, she had over 1800 ships and about 80 thousand male and female pirates under command. She commanded the famous Red Flag Fleet defending every naval power of her time, even the united forces of China, England and Portugal. She was finally given amnesty for herself and all pirates of her fleet who were willing to return to shore, while keeping all their wealth. Ching Shih accepted the general pardon and spending the rest of her life operating a gambling house. She died peacefully in the age of 69. She has influenced popular culture ever since. Recently she appeared in several books and movies, most famous as Mistress Ching in The Journey to the Worlds End, the third movie of The Pirates of the Caribbean.
I almost did not make it tom the deadline. The picture is still a work in Progress. I will change it to the final rendering shortly.
The digital collage was crafted in layers from three of my paintings, the pirate, the parrot and the ship placed on a digitally painted background. The dragon comes from my clip art collection. I used several filters, to many to mention all. Colors of the parts were adjusted to each other.

Post Type: Digital Art Digital Painting | Collage Collage of my own paintings and clips from my collection, Filters, layers

Pirates of the China Sea by cleo85 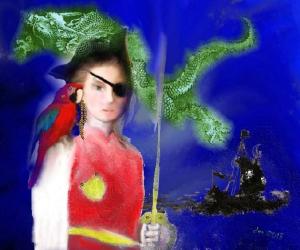 cleo85 has granted FanStory.com, its affiliates and its syndicates non-exclusive rights to display this work.
Copyright © 2000 - 2022 FanStory.com. All rights reserved. Terms under which this service is provided to you. Our privacy statement.
top
You Have No Rank
Share 4 posts to be ranked.