Flowers and nature seem to be my inspiration for just about everything, flowers, nature, photography give you what you want most creativity. For the love of flowers, gardening & photography...

The winner of the Photograph of the Month Contest. You can view her the winning photograph here. View her winning contest entry here. 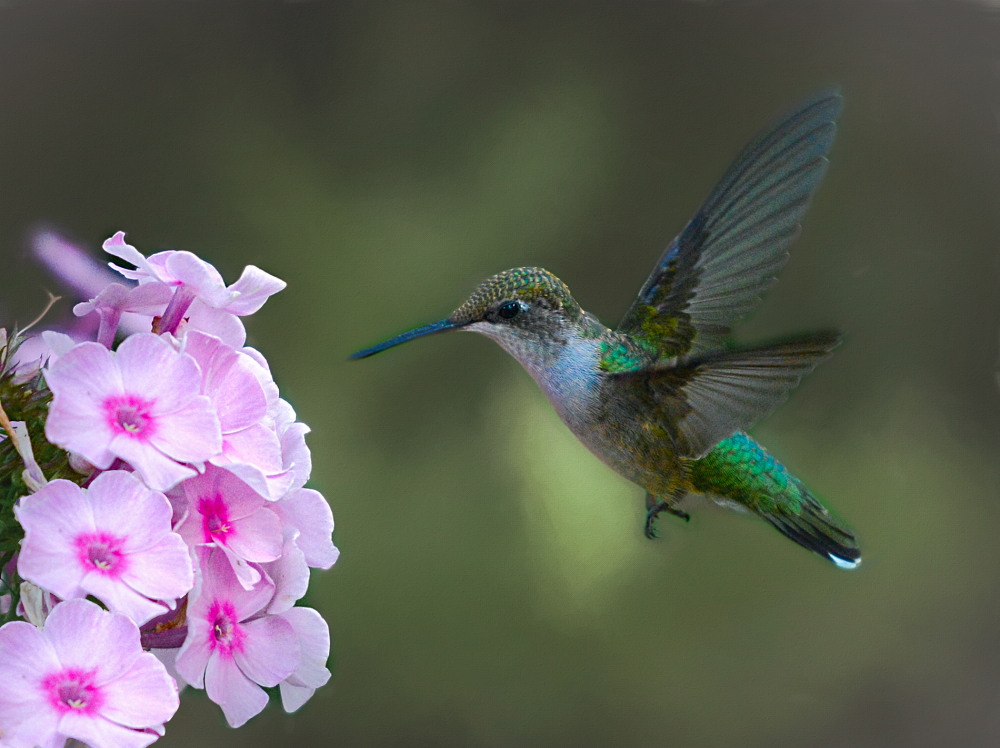 I have been patience and have enticed these Hummingbirds by planting some of their favorite flowers and now that the garden is in full bloom they have arrived. An evening capture of a Female Ruby-throated Hummingbird heading straight for the Pink Phlox. The Hummingbirds, Archilochus colubris, are probably the most common hummingbird in the world Around 300 different species of hummingbirds exist around the Americas in places such as the United States, the Caribbean, Ecuador and Canada. Major noticeable differences occur in male and female hummingbirds, such as appearances, overall size, breeding roles and behaviors. You can easily identify the sex of a hummingbird if you look closely. Male and female hummingbirds can be identified simply based on the color of their feathers. Male hummingbirds have bright feathers to attract females and to deter males by expressing their dominance. A patch of brightly-colored feathers on the necks of males is known as a gorget. A gorget's color range includes red, purple, orange, blue and pink. When hit with sunlight, the gorget will glisten due to refraction, or the bending of sunlight against the different-sized feathers. Males can make the gorget appear to be black to avoid attracting predators. Unlike males, female hummingbirds have no bright feathers to display. Females are often brown or dull green in color. Immature male hummingbirds typically resemble females in that they have no bright feathers. Although it is hard to tell, female hummingbirds are typically larger than males. For example, females usually weigh between 2.8 and 4.5 grams, while males weigh between 2.4 and 3.6 grams. This size difference is because females lay eggs and their bodies need to be able to support this process, from actually laying the eggs to sitting upon them to keep them warm. In mating situations, it is simple to tell a male and female hummingbird apart. Once a male hummingbird finds a female to mate with, he will do a series of dances to impress her. Sometimes females even join males in their dances. Males and females do not mate for life, and males play no role in caring for their offspring. After mating, the female will build a nest and raise her offspring on her own. Females will chase away males that come too close to their nest, as the bright males attract predators. In general, male hummingbirds are much more aggressive than females. They need to be aggressive to attract females and to defend their territory. Males also do a lot of scratchy chirping to attract females or to bicker with other males. Both male and female hummingbirds migrate to warmer temperatures, often traveling more than 2,000 miles to breeding grounds. Males often begin to migrate before females. The tail of a hummingbird can provide a vital clue to help determine if it is a male or female hummingbird. Most of the time, the tail of an adult male hummingbird will be solid in color while most female and juveniles? tails have white tipped rather then solid in color. Thanks for viewing!
Post Type: Mixed Media Photography
Mixed Media: Medium Cropped, Light Room adjustments to Raw Image, Photo shop ( added more blooms to flower) Topaz Studio ( added slight textures, adjustments to background color) 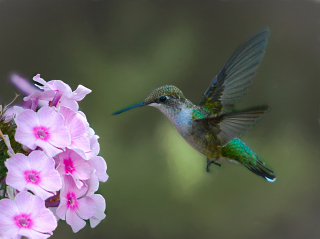 Stringbean has granted FanStory.com, its affiliates and its syndicates non-exclusive rights to display this work.
Copyright © 2000 - 2020 FanStory.com. All rights reserved. Terms under which this service is provided to you. Our privacy statement.
top
You Have No Rank
Share 4 posts to be ranked.